Team Xbox has a nice interview with Bad Day LA art director Ken Wong. Many of you are familiar with Ken Wong because of his work on many of my twisted tales properties including Oz and Grimm. From the interview:

What were the most difficult challenges you had to face in order to create the game art?

Ken Wong: Rather than technical problems, the biggest challenge has been the cultural divide. American and I are English-speaking westerners in Hong Kong, while most of the BDLA artists are in our Guangzhou studio in mainland China, where they donâ€™t speak English or receive much US culture. So itâ€™s been very challenging firstly just communicating with them, and secondly trying to explain to them some of the more esoteric jokes in the game. To overcome this, Iâ€™ve focused as much as possible on using images for communication rather than words. I think they still donâ€™t get the jokes, though.

You can read more about Ken’s adventures in art directing in the full article.

While creating Bad Day LA we tried to come up with a variety of interesting and unique enemy characters for the player to fight against across the city. Included in the final list you will find: terrorists, zombies, mutant cos-players, angry homeowners, rabid dogs, and finally, lots of street gangs. Lest anyone think that the game is picking on gangs or making an issue out of something minor, take note of one of today’s news headlines:

U.S. arrests 582 in nationwide gang crackdown
More than 25,000 gangs, comprising some 750,000 members, are active across the United States, according to the Justice Department. Lawmakers and law enforcement officials have been especially alarmed at the spread of extremely violent Central-American-based gangs such as MS-13, a group originating in El Salvador now present in 31 U.S. states.

Look at those numbers! 25,000 gangs? 750,000 members? Unless someone somewhere misplaced a couple of zeroes those are truly huge ranks. That far exceeds the estimated number of insurgents (30k?) currently causing our 140,000+ US soldiers so much trouble over in Iraq. And our guys there are armed with tanks and machine guns, which apparently they are allowed to employ quite liberally. The article goes on…

In April, Victor Ceara of the Department of Homeland Security testified that in fiscal year 2004, his division removed 84,000 criminal aliens from the United States. However, he said an estimated 400,000 were still at large.

Wow. 400,000 criminals still at large.
This reminds me of something said to me just before I moved to Hong Kong, “You shouldn’t move over there, it’s not safe. The city is run by the Hong Kong mafia and it’s too dangerous.” To be honest, since arriving here I’ve never felt safer. There is literally a cop on every corner. The gangs are still here, but unless you’re involving yourself in something illegal you’ll never notice them.

From personal experience I know this is not the case in the states. There, while I was in high-school, I was unceremoniously jumped by a gang of ~30 young Mexican guys. They gave me a near-death beating that sent me to the hospital, laid me up for a week, and caused damage to my teeth that I still have to deal with by visiting an oral surgeon at least once a year. Wrong place, wrong time. And they were never caught.

When playing Bad Day LA you might think, “Man, American really doesn’t like Mexicans…” You’d have to look past the fact that one of the main characters (and one of my favorite characters in the game) is Hispanic, but whatever, go with me. To your allegation I would respond: No. I don’t have anything against Mexicans. In fact, while it was Mexican kids who jumped me and nearly killed me, it was Mexican adults in a nearby church who came outside and saved me. It all balances out. What I *do* hate is gangs. Any time you have to bring your friends to a fight you’re a loser in my book. Not that you would care… but at least now I’ve been able to create a cathartic game play experience that allows me to mow down lots of gang members from the comfort of my living room without ever harming a real person. I can tell you honestly, this is the best therapy ever.

Hey, maybe the Department of Homeland Security should use Bad Day LA to train their agents like the U.S. Army uses America’s Army to train their soldiers?

You can read the full article here.

Sal ‘Sluggo’ Accardo is running an interview focused on the design and art style of Bad Day LA over at GameSpy. The interview begins…

FOR ALL THE ENTERTAINMENT VALUE we get from them, it’s amazing how few videogames are actually funny. Amidst alien invasions, sports simulations, historical battles and fantasy adventures, humor is something that’s often forgotten about. Enter Bad Day LA, which looks to be equal parts action-adventure and social satire, being developed by a team helmed by Alice creator American McGee.

The interview offers insights on the genisis of the concept, working with art team Kozyndan, and other elements of the game and its design. Be sure to check it out. 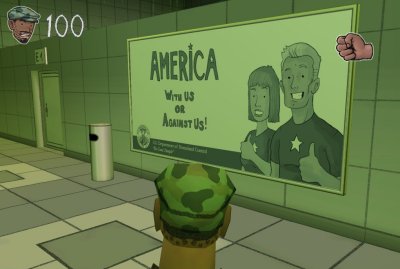 GP: Donâ€™t you guys fear that the game will disappear in the mediocre list of games, because it cannot really compete with graphically superior games like FEAR, Quake 4 or Ghost Recon 3? How are you going to convince people this game has a lot more to it?

AM: The Sims didnâ€™t become the best selling PC video game in the world because of a superior graphics engine. It sold because it is a great, fun game that appealed to a wide market of casual, non-hardcore gamers. My hope with BDLA is that it will appeal to a fresh crowd of mass market and casual gamers who are new to 3rd person action titles and looking for something highly entertaining and non-frustrating. Personally, I think that games like the ones you mentioned neglect the wider market possibilities by focusing almost exclusively on the hardcore gamer market. Ultimately, I probably wonâ€™t be able to convince a lot of hard core gamers to even look at BDLA, especially if all they are interested in is next-gen graphics. But, I think even of few of those gamers will be swayed by the originality and comedy of BDLA.

Dan Adams over at IGN posted a really informative interview that’s worth checking out. A lot more detail about the game, some new screenshots, and other goodness:

June 8, 2005 – It’s not often that a game really comes along to prove some sort of social or political point. Maybe it’s because gamers don’t really like to think or consider things in regular life while playing games or maybe it’s just because developers are lazy and would like to leave that sort of thing to authors and movie makers. The biggest reason is probably just that it’s hard to make a game fun around something that’s at least a passably serious subject.

A very positive article covering Bad Day LA from E3 was just posted over at Gamespy.

You know, I have to say I really appreciate the response that the press has given BDLA so far. For a while I was fearful that the art style, story, and overall concept would be rejected outright. Original content is a tough thing in the video game market these days.